In its most general form, Blackface is the act of a non-Black person playing a black role. The act of Blackface is almost always accompanied with the donning of black makeup to “darken up” performers in theater productions. However, Blackface is much more than just dark makeup used to enhance a costume. Its origins, minstrel shows in the late nineteenth century, were composed of white actors routinely using black grease paint, for instance, when depicting plantation slaves and even freed Blacks. As one would imagine, these representations were far from flattering, as what would be predicted given the systematic mistreatment and dehumanization of Black people in this era. Representations of Black characters often took on caricature-like forms. Blackface was simply a theatrical form of the widespread view of Blacks by whites: inhuman, inferior, entertainment.

The final point—entertainment – is often hard for most people, including myself to fully understand initially. However, rather quickly, you can come up with contemporary examples. One that almost instantly popped into my head was in sports. Blacks are vastly overrepresented in professional and college athletics, this is clear anytime you turn on your TV to watch basketball or football. Some portions of the American population have taken on the strange position of “liking” Blacks as long as they run fast, catch the ball, make the tackle, and score. That awe quickly vanishes however, as soon as Black players step out of the role of entertainment. For these individuals, anytime a Black athlete does anything not pertaining to sports, they completely dismiss them. To them, this once one dimensional object made solely for their entertainment becomes something real, someone demanding recognition and respect, and they are jarred to say the least.

While Blackface and the concept of entertaining-Black wasn’t very foreign to me, the idea of Digital Blackface initially was. But rather quickly, it made complete sense. Rather than the conducting of and participation in physical Blackface (theaters), Digital Blackface is a digital performance of the same stereotypical ideals of traditional Blackface. Although, I personally do not see the two as having the same level of severity, they definitely have obvious similarities; both depict Blacks engaged in exaggerated emotions, facial expressions, and movements, and both are consumptions of Blackness (being Black) and/or Black culture (what is means to be Black). The only major difference is that traditional Blackface was done almost always by Whites but Digital Blackface includes Non-Black individuals as well.

From my experience, I have witnessed three major forms of Digital Blackface and their label as Blackface is up for debate.

Blackface in Mobile Apps. I’ve really only ever seen this once. A few years ago, Snapchat released a novelty filter for 420. This filter allowed users to face-mesh with the iconic Jamaican figure and Reggae artist Bob Marely. Obviously there was some outcry from this and even though Snapchat had gotten permission from Marley’s family to use his name and likeness, people were not placated. While it may not be considered Digital Blackface, I think we can all agree that it’s just plain weird. Also, Marley did not wear a Rasta hat, so that’s just annoyingly inaccurate.

Parody. If you’ve ever had a twitter you know that many times you’ve probably interacted with or seen tweets from accounts who’s avatar does not match the user. Instances of this include the creation of twitter accounts and other social media profiles with black avatars by white users; famous examples of such include @TheSaintNegro29, @BlackPeopleProbs, and more, both have which have been exposed as having white creators. As you can imagine, many of the tweets coming from this profiles start off with “As a Black person…”, making anonymous and misplaced claims to a Black identity. The anonymity afforded by the Internet allows these users to make and continue to perpetuate the stereotypes of Blacks, projecting an image of Black people, Blackness, and Black identity that fits with the anti-Black narrative.

GIFs and Memes. More often than not, the most popular GIFs feature a Black individual, and that individual is usually engaged in some exaggerates expression; Black individuals become the default for extreme expressions of emotions. This could be related to some strange, and possibly unconscious desire to see Black people perform, simply reaffirming the stereotype of “animatedness” character of Black individuals and their and one-dimensional beings. Even times of trauma, sadness, loss, and true anger expressed by Black individuals becomes a catchphrase or a hilarious GIF. The “memefication” of the truly horrifying events experienced by Dodson and Brown are examples of such. These memes effectively stripped both the experiences of Dodson and Brown of context, preventing these individuals from being seen as human, reconstructing them as a caricature, replacing them as a farce. 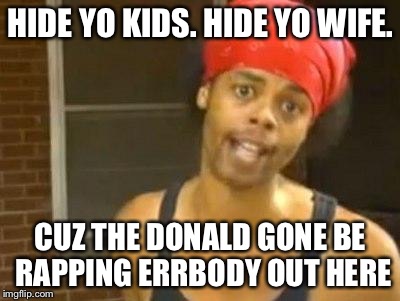 Even if you don’t agree with the assertion that Digital Blackface is real, you have to admit this all the aforementioned are just plain weird.

To leave with you something extra, check out this video.

« The Internet of Things
Time »